My daughter came downstairs an hour after she was supposed to be in bed. I had recently smoked marijuana and had just witnessed one of the greatest runs of basketball I’d ever seen, the Celtics coming back from a 24-point deficit to go into the second half of their playoff game with the score now, against all odds, virtually tied. I was high, my energy was flowing with the excitement of the court, and now here came my five-year old daughter, who’d long since gone to bed.

“Dada,” she said, her voice calling out from the darkness of her playroom at the bottom of the stairs.

She walked into the living room, her eyes immediately captured by the flickering lights on the TV. “Um…,” she continued, her eyes locked, “Um…um…it’s…it’s…it’s..important.”

She glanced over at me, but her brain couldn’t fight the wonder of the flickering lights, and her eyes went right back to the TV. “Um…”

“Look at me. If it’s really important, you have to look at me.” I turned down the volume on the television.

She turned and locked eyes with me. A knowing, impish smile grew on her lips. “Um…”

Her smile dropped away. “Um…I have a toenail…that’s… scratching me.”

“And that’s important?” I said.

She lifted her foot to show me.

“I believe you have a nail scratching you,” I said, “but why is that important? Why did you need to get out of bed and come downstairs to tell me that?”

She took my hand, led me out of the living room, across her darkened playroom, and up the stairs.

My daughter has a tendency when she gets to the top of the stairs to forget every intention she might have and simply run across the hallway to dive onto my bed. I know this about her. But I also knew that, at that moment, her mother was on that bed, and if my daughter jumped onto it (which she would inevitably do), she would cause my wife pain, so as we climbed the stairs, I placed my hands lightly atop her shoulders and repeated the phrase, “Remember what’s important. Remember what’s important.”

She reached the top of the stairs, and I felt her hesitate a moment. Something inside of her was telling her to run to the left and leap onto my bed, but something else was telling her to turn right and head towards the bathroom, where we keep the nail clippers. Without putting any more pressure on either of her shoulders, I said it again, “Remember what’s important,” and she immediately turned right. I removed my hands from her shoulders.

The hazard at this point was the full-length mirror at the end of the hallway. She loves to skip and jump towards it, to make faces in it, and to shake her butt at it like her cousins taught her to do. But I needn’t have worried, because all by herself, she turned right again and walked into the bathroom.

She cut a sharp corner to step onto her stool, which we keep right beneath the light switch. My hand went to find the light, but her fingers beat me to it, and I withdrew. She turned on the light herself.

“Is it in the middle cabinet?” she asked.

The mirror over our sink has three cabinets behind it, and we keep the nail clippers on the middle shelf of the middle cabinet, the same place we keep all of our other relatively sharp health and beauty tools.

I opened the cabinet for her because she can’t reach it without climbing on the counter. “I know you can get it yourself,” I said, “But let me help you just to make it easier.” She resisted the urge to disagree with me.

We keep the clippers inside a glass mason jar. Like most houses (I suspect), we have big, honking clippers for toes and smaller clippers for fingers. Unlike most houses (I suspect), we have three different versions of fingernail clippers. The jar contains them all, as well as a pair of scissors, a few pairs of different sized tweezers, and some random hair clips. I dug my fingers into the jar.

“Wait! Wait!” she yelled. “Mine aren’t in there! Where’s mine?” We’d been using baby clippers on her since the day she was born, and she couldn’t see them through the glass jar.

Now, the truth is that I was poking around to see if her baby clippers were in the jar too, but instead of telling her that, I said, “I think you’re ready for a real set of clippers,” and her eyes lit up.

Remember, I was rip-roaring high at this moment and still surging with a ton of energy from watching great playoff basketball, but I also knew it was half time back in Boston and there was absolutely no rush for anything.

I pulled out all three of the fingernail clippers we own, and I displayed them before her on the counter. “Which one do you want?”

Diamonds have never received as close an inspection as the first pair of clippers she picked up. She opened them slowly, rotating the push-handle into its proper, functional position with as much deliberate focus as a trainer testing the rotation of an athelete’s questionable leg. First with her thumb, and then with her index finger, she pushed the handle down, checking for proper resistance against her five-year-old finger-muscles. Her eyes scanned the metal, searching for some perfection or some flaw, her judgement open to both. Satisfied by something I couldn’t say what, she returned the first pair of clippers to the counter and picked up the second of three.

She repeated the process, but I noticed, about halfway through it, that the information she was gathering from her second inspection seemed to be equal to the information she’d gathered from her first, and a look of concern came over her face as she realized she didn’t know how to judge one pair of clippers against the other.

I scanned all three clippers for a moment and saw that on the inside flap of the push handles, away from where her eyes had looked, all three clippers were different: one had the numbers “556” printed on it, flanked by two stars; another was blank metal; and the third was embossed with the logo of its maker, a stylized depiction of the word “Trim,” with a note that the logo was a registered trademark.

“Look at this,” I said, and I opened all three clippers wide so she could see what she had yet to see. “They’re not all the same.” Her concern became curiosity, and she noticed something I hadn’t noticed: one of the clippers came with a filer/nail cleaner attached to it. I was bamboozled by the fact that I had hadn’t noticed it before, but now that we both had, we knew this was the pair for her.

I picked it up and showed her how the hook on the nail cleaner worked. She was mezmerized. She took it out of my hands and inspected it, now less like a doctor and more like a child with a new and exciting toy.

“Can I do it myself?” she asked, her eyes still locked on the clippers.

She sat down on her stool, her fingers playing with the nail cleaner. She went to use the hook on one of her toes, and I said, “Remember what’s important.”

“Oh yeah.” She rotated the nail cleaner back into its safety position, leaned over, and clipped the sharp nail off of the inner edge of her big toe. She rubbed her finger over the spot to check if it was still sharp; it wasn’t. I rubbed my finger over it too just to make sure; she was right: it wasn’t.

She started to clip a nail on another toe, but I stopped her.

She stood up without a word of argument (which is very much not like her…nor like any other Callahan I’ve ever met), and she began looking around to find a place to store her new clippers. “Let’s put them someplace where you can reach them,” I said. She stepped onto her stool, reached up, and opened up the nearest medicine cabinet. I pushed aside our toothbrush holder (another mason jar) to clear a space on the bottom shelf. She reached up by herself and put the clippers where she could reach them.

She wasn’t done. After a moment, she turned the clippers over, then turned them over again, trying to find the best way to place them on the shelf.

She didn’t take me at my word, deciding for herself to test my hypothesis, and when she saw there was some doubt to be had, she voiced it. “It rocks a lot on the flat part too,” she said.

“Yeah,” I answered, “but see how it rock backs into place rather than tipping over like it would if it were on the other side?”

She went to test me again, but I was pretty sure my second hypothesis was wrong as well, so I stopped her, saying, “It’s getting late hun. You took care of what’s important. It’s time to climb back into bed.”

She withdrew her hand from the cabinet. I closed it. She stepped down off her stool and turned into the hallway. “Did you give me those ones because they were the safest?” she asked.

We were standing at the door of her bedroom now, and she turned around and leapt into my arms, first squeezing me tight, then pushing herself back so she could look me in the eye.

“Watch this.” And then she showed me that she can make a proper “S” sound. For the past year or so, I’ve been consciously working with her to eradicate her five-year-old lisp. I don’t correct her all the time, but it’s something we do together, and she knows it makes me proud when she uses a proper “S” sound.

I gave her a huge smile, completely surprised and amazed, not that she could make the sound, but that she would choose this very moment to make it for me, after we’d just had this really awesome experience where I told her she was now old enough to have and to use all by herself her very own set of nail clippers.

This was her way of saying “Thanks,” and of saying, “I love you”: by doing a thing she knows will make me proud.

I squeezed her tight and told myself quietly, “Remember what’s important.”

The next morning, after she’d been tasked with going to the bathroom to brush her teeth, she seemed to be taking a longer time than was necessary, plus I hadn’t heard the sink turn on. I got out of bed to check on her, but she must have heard me coming. “Dada,” she said, “I think I have to cut my nails.”

I laughed to myself and entered the bathroom. “Honey, what did I say last night? Those aren’t a toy, right?”

She clutched them to her chest. “Do I have to ask if I can use them?”

She reached up and put them back on the shelf, but I could tell she wasn’t disappointed; instead, she was proud. 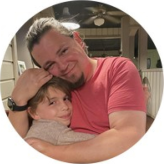 Relationships
Self
Politics
Self